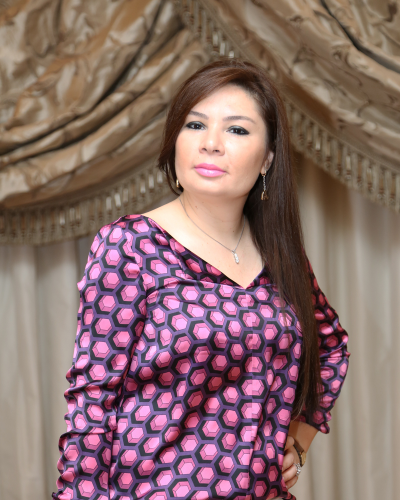 She was born on November 16, 1979 in Moscow. She has graduated from the faculty of "Musical Comedy Acting” of Culture and Art Institute in 2001. Since November 1, 2005 she has been working as a choir singer at the Azerbaijan State Musical Comedy Theater. Her voice timbre is soprano. She played at "Banker Fiancé”, "Red Hat”, "Love on the stage”, "Love Game”, "The Merry Widow”, Keep your hands in your pocket”, "Aunt Masma is my uncle”, "Maritsa", "When fates come together”, "Lover with Volga”, The Gypsy Princess”, "Baydulla’s amazing wedding”, "Mad Gasskonet”, "Temporary pleasure marriage”, "If you get your share call your uncle”, "Everyone has his own star”, "The Devil's Anniversary” as choir vocalist. She also participated in some performances as actress in the role of "Ceyran” at "The Devil's Anniversary" by O. Rajabov, A. Babayev, "Bim” at "Golden Dwarf”, "Female Fox” at "Adventures of rainbow mushroom” by R. Shafag, V. Zimin, "Chichak” at "Funeral March or Congratulations” by M. Mammadov, "Nazaket” at "Jealous Hearts” by Ramiz Mirishli, Marat Hagverdiyev, "Translator” at www.ferzeli-kef.com by E. Sabitoghlu and C. Mammadov.