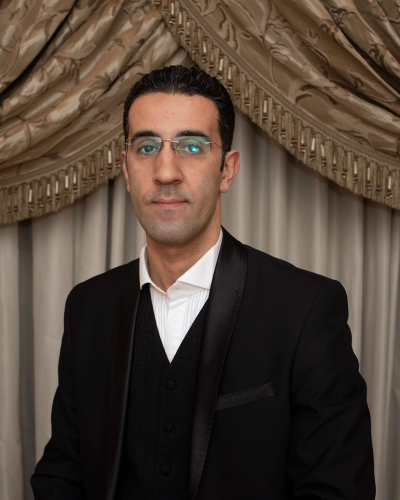 Samad Suleymanli, son of Vagif, was born on August 26, 1983, in Baku, in an enlightened family.

In 1989, he went to secondary school No. 83 (located in the eighth micro-district of Binagadi district). In 1997, he graduated from the Faculty of Music and Performing Arts of Bilkent University, named after Ihsan Dogramaci in Ankara, Turkey, with a degree in wind instruments (Trumpet). He has performed as a soloist in Ankara, Istanbul, Mersin, etc.

In 2001, he entered the faculty of "Conducting, percussion and musicology" of the Baku Music Academy. He received his conducting faculty in Javanshir Jafarov, People's Artist of the Republic of Azerbaijan, professor of the Baku Music Academy, artistic director and chief conductor of the Opera and Ballet Theater. While still a student, he worked as a concertmaster in the Niyazi Symphony Orchestra of the Azerbaijan Television and Radio Broadcasting Company (Aztv) since 2002. In July 2005, he was called up for active military service. During his military service, he served in the Special Exemplary Military Orchestra of the Ministry of Defense of the Republic of Azerbaijan. On October 15, 2005, he was promoted to manga commander's rank on March 10, 2006, to "Chief Soldier" and on June 22, 2006, to "Little Sergeant." He was discharged from the army on July 1, 2006. In the same year, he was reinstated in the Niyazi Symphony Orchestra of the Azerbaijan Television and Radio Broadcasting Closed Joint-Stock Company. In 2011, he was elected chairman of the Trade Union of the Niyazi Symphony Orchestra of Aztv. In 2017, he was awarded the "Decree of Honor" by the Deputy Minister of Defense for Personnel, Lieutenant General Karim Valiyev (for his achievements). At the same time, since 2012, he has been working as a teacher of "Percussion" at music schools No. 2, named after R. Behbudov and No. 23 named after A. Badalbeyli.

(It should be noted that Samad Suleymanli's students have been awarded laureates in many competitions and festivals.) He was awarded the "Decree of Honor" for his high achievements in the 2016-2017 academic year and significant work in the school's public life. He has been working as a conductor at the Azerbaijan State Academic Musical Theater since 2017. He performed in concert with the Academic Musical Theater's orchestra during the music week dedicated to Music Day on September 18, 2019. In December of the same year, he conducted many vocalists at the Azerbaijan Vocal Festival.

During his work in the theater, he conducted  "Husband and wife” by Uzeyir Hajibayli, "When fates come together” by R.Hajiyev, "Golden Wedding" by O.Kazimi, "Jealous Hearts" by R.Mirishli, "Baladadash's Wedding Bath" by F.Allahverdi, "Red Hat” by  E.Sabitoghlu. In addition, he is the music director and composer of the play "Me, Grandma, Iliko and Illarion". He is the producer of the new play "Investigation" by J.Allahverdiyev at the Academic Musical Theater.