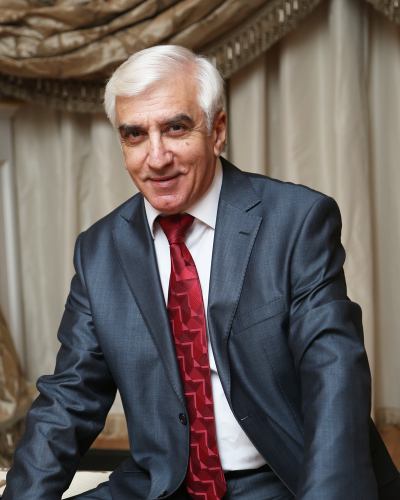 The actor was born in Baku at the 9th of January in 1949. Between, 1966-1970 he studied at Azerbaijan State University of Culture and Art in the faculty of "Drama-cinema actor”. Due to acting quietly successful at the main role performance based on Moliere’s "George Dardin” he was accepted Academic Actor Troupe of the theater. The actor has participated in the several roles afterward he was invited to the Academic National Drama Theatre in 1972 such as "Musyo Jordan” at "Museo Jordan and Darvish Mastali”, "Yellow Garayev” at "Rich Woman”, "Teacher Zaman” at "People of this World”,” Laughing Man” at "Everyone’s own share”, "The Man” at "My Husband is Out of Mind” and "Dr. Garatay” at "Afət”. After joining Azerbaijan Youth Theatre in 1989 Ilham Ahmadov has also created unforgettable performances here. He acted as " Irresponsible Man” at " Desperate Passengers”, "Dadashbala” at "Dadashbala Operation”, "Sultanqulu” at " Sultanqulu Bridge”, "Kalantar” at "We build mountains”, "Daniel” at " My wife’s murder”, "Kazbek” at " I, myself am the husband of my spouse”. He performed specific roles at Azerbaijan State Musical Comedy Theatre in the years 1989-1991. The actor revealed astonishing acts in the role of "Albadam” at "My Lover’s Mother” by E. Mansurov and G. Khugayev, "Domenico Soriano” at "Filumeno Marturano” by F.Garayev and E. Filippo, "Meydan” at "Evil’s anniversary” by O. Rajabov and A. Babayev, "Colonel Mikayil” at "Jealous Hearts” written by R. Mirishli and M. Hagverdiyev, "Ibad Ibadov” at "Whereas I am old, I am worth to thousand young” by F. Sudjaddinov and T. Valiyeva, "Əhmədağa” at "Funereal March or congratulations” by M. Mammadov, "Atakişi” at "Banker Fiancé” by  T. Valiyeva, "Orkhan” at " American Son-in-law” by R. Mirishli and M. Hagverdiyev, "Mərcan” at "Husband and wife” by U. Hajibeyov, " Fərzəli” at "www.ferzeli-kef.com” by E. Sabitoghlu and J. Mammadov and "Bəbirli” at "Caucasian Niece” by R. Hajiyev. He was "Ilgar” in "Mother in law”, "Abdulrahman” in "Strange Man”, "Director MIS” in "My wife, my children”, "Journalist” in "Accords of long life”, "Ali” at "Gold Goose” and "Anar” in "Stealing of the groom” films The professional actor has also directed "Evil’s anniversary”, "American Son-in-law” plays. Reviving  many satirical characters in the films produced by”Azerbaijanfilm” and other TV-shows  as like "Mozalan” based on same name satirical film-magazine he become favorite actor of spectators. The actor is engaged with pedagogy since 1997. He is a professor and head of Musical Theatre Actor department at Azerbaijan State Culture and Art University. He was awarded the "Honored Artist” in 1982, "People’s Artist” in 2002, "Golden Darvish” in 2000 and "Shohrat Order” in 2013. He has been rewarded Presidential Pension since 2012. The staff of Azerbaijan State Musical Comedy Theatre congratulates and wishes good health and new achievements