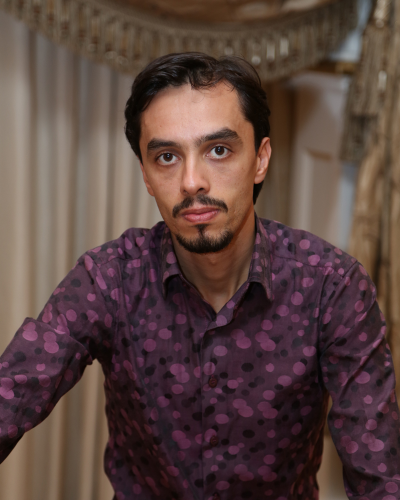 Alili Huseyn – son of Azad was born on June 10, 1982 in Baku. He worked at "Farah” dance ensemble of State Children Philharmonic. He also participated in the 25 festivals held in Turkey, performed in the concert programs in the frontline and was awarded with diplomas. In 1998 he was admitted to the position of "Ballet Actor” at the Azerbaijan State Musical Comedy Theater. In 2000 he entered the Musical Theater Acting faculty of Azerbaijan State University of Culture and Art and graduated in 2004. Since that year he has been working as a "Actor-vocalist" in the theater. During working the period here he was "Balakishi” at "Banker Fiancé” by E.Sabitoghlu, T.Valiyeva, "Murad” at "When fates come together” by R.Hajiyev, "Police” at "Keep your hands in your pocket” by O.Rajabov, A.Babayev, "Police” at "Laugh for 92 minutes” by R.Ahmadzade, "Bartender Soltan” at "If you get your share call your uncle” by V.Adigozalov,Anar, "Macedon”  at "Jealous Hearts" by R. Mirishli, M.Hagverdiyev, "Second Police” at "Beggar son of millionaire Father”  by  S. Alasgarov, Sh.Gurbanov,  "Ahmad” at "Whereas I am old, I am worth to thousand young” by F. Sudjaddinov and T. Valiyeva, "Jem” at "There is a maniac in the city” by S.Farajov and A.Nesin, "Mayil” at "The fraudsters” by S.Alasgarov, I.Malikzadeh, "Poruchik” at "The Gypsy Princess” by E.Kalman, "Waterman” at "Husband and Wife” by U.Hajibeyov, "Timote” at "Khanum” by V. Dolidze, A. Saqarelli, "Darvish Abbas”  at "Kimyager” by S. Karimi, E.Ol, "Police Aslan” at "Mother of Seven Prisoners” by J. Guliyev, A. Amirli, "Mahmud” at "Who is the guilty?” by A. Hagverdiyev.