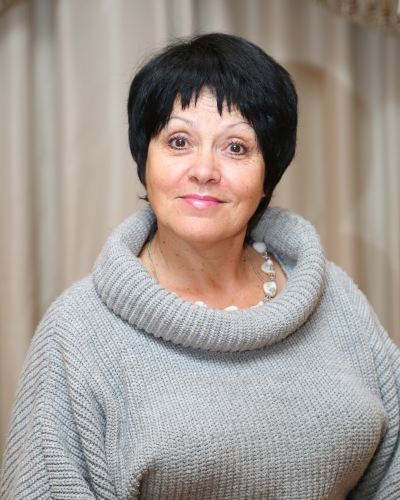 Bulakh Svetlana Mikhaylovna was born on May 28, 1950 in the Donetsk province.  She was admitted to the satellite "Theatre Staff Preparation” school of Kiev State Musical Comedy Theater in 1969 and graduated from the faculty of "Operetta Actress" in 1971. She started working at Kirovocho Russian State Musical Drama Theater named after Shevchenko. Between 1971-1973 years while working there she played in several spectacles. As "Stasi” at "The Gypsy Princess” by E.Kalman, "Lizochka” at "Maritsa” by E.Kalman, "Katya” at "Moscow Holidays” by Aleksandr Kuzneov, "Pepitta” at "Free Wind” by Isaak Dunayevski,  "Tanya” at "Stranger by Night” by V. Dimityev, "Valentina” at "Past Supper” by Eduardo Shevadzuchi,  "Mziya” at "Don’t worry mom” by Nodar Dumbadze, "Chi-chi” at "Doctor Aibolit” by Pyotr Tchaikovsky, "Rabbit” at "Live Music” by L. Ustinov. In 1982, she moved to Baku because of family problems. She joined the Azerbaijan State Musical Comedy Theater in 1983.She plated in the role of "Diana” at "Filumena Marturano” by Faraj Garayev, Eduardo De Filippo, "Golda” at "Memorial Prayer” by Grigori Gorin, "Fox” at "Red Hat” by Emin Sabitoghlu, "Frog” at "Thumbelina” by H.C.Anderson, "Afet” at "Once upon a time in Baghdad” by E.Sabitoghlu, "Dodo” at "Overshoot” by Rauf Hajiyev, "Countess Irini” at "The Gypsy Band Leader”  by E.Kalman, "Yuliana” at "The Gypsy Princess’ by E.Kalman, "Bojena” at "Maritsa” by E.Kalman, "Milicha” at "The Merry Widow” by Franz Lehar, "Marietta” at "Bayadera” by E.Kalman, "Elly” at "Galladochka” by I.Kalman, "Madam Balandra” at "The Jokes of Jacques Offenbach” by Jacques Offenbach, "Lena Ostapchuk” at "Everything starts with love” by O. Felchman, "Diana” at "Filumena Marturano” by Faraj Garayev, Eduardo De Filippo, "Syuzetta” at "Playing a happy family game of French Garner” by Mark Kamoletti, "Telli and Aunt Jahan” "Arshin Mal Alan” by Uzeyir Hajibayov, "Nerina” at "The Impostures of Scapin” by J.B.Molyer, "Fox” at "Golden Chicken” by Vyacheslav Ulyanovsk, "Witch” at "Two Witch Women”  by Ali Alizada, "Nifnif” at "Just  wait” by Rena Aghayeva. She has been second director at some child performances, such as "Golden Chicken” by Vyacheslav Ulyanovsk, "Two Witch Women” by Ali Alizada, "Just  wait” by Rena Aghayeva. She starred in "Mehelle in Moscow” film as "Russian Woman”.