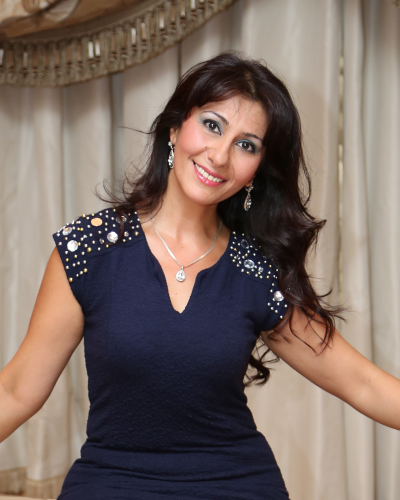 Karimova Nargiz - daughter of Faig was born on August 13, 1970 in Baku. She studied at the secondary musical school in the fortepiano class named after Bulbul in 1977-1988. In the years 1988-1992, she graduated from the Baku Music Academy as a vocalist with a red diploma named after Uzeyir Hajibeyov. She won "Laureate” in the Baku Music Competition held by Azerbaijan Composers Union in 1988, a year later he become winner of "Golden Autumn-89” Republic Competition and was prize-winner of "New Names" III Republic All-Union competition in Moscow. She was awarded with Honorary Decree for successful performance in the second round of XIV International Vocalists Competition held in Almaty named after M.Glinki, in 1991. Since 1994 she is the soloist of the Azerbaijan State Television and Radio Company. She successfully performed in the concerts in Moscow, St. Petersburg, and London. She performed classical and contemporary works accompanied by symphonic and chamber orchestras in public events, state events, at concert hall of Baku, Republic Palace, Moscow's "Russia" and "Columnful" halls. She was accepted to the actor position at Azerbaijan State Musical Comedy Theater on April 1, 2002. She acted in the different roles. She was "Nargiz” at "When fates come together” by R. Hajiyev, "Mulayim” at "Lover with Volga” by R.Mustafayev, A.Gudrat, "Malak”  at "Temporary pleasure marriage” by S. Farajov, R.N.Guntakin, "Susan” at "If you get your share call your uncle” by V.Adigozalov, Anar, "Gulnaz” at "If not that one then this one” by U.Hajibayov, "Sabina” at "Jealous Hearts" by R. Mirishli, M.Hagverdiyev, "Bildirchin” at "Beggar son of millionaire Father”  by  S. Alasgarov, Sh.Gurbanov, "Yulishka”  at "The Gypsy Band Leader” by E.Kalman, "Keto” at "Khanuma” by V.Dolidze, A. Saqarelli. According to her achievements in the field of theatre she was nominated with the diploma of "Best Young Actress of the Year" in 2003. The actress was announced Honored Actress in 2012 and also Presidential Prize winner in 2013.