"Unknown Stairs" was greeted with applause at the Academic Musical Theater 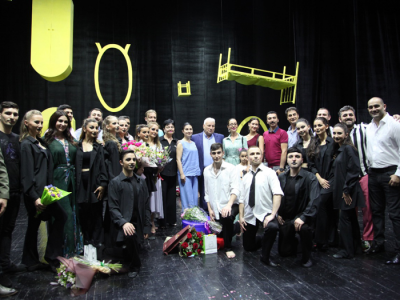 The premiere of the ballet performance "Unknown Staircase" was held at the Azerbaijan State Academic Musical Theater within the framework of the "Parade of Premieres" festival.
The performance, attended by well-known ballet artists, theater actors, and art masters of the country, was sold out. The plot line and artistic design of the play, intended as a propaganda tool against drug addiction, aroused interest in the audience.

The music in the performance were used from foreign composers and Honored Artist Sevda Alekbarzade. Thecomposition of poems is belong to the People's Poet Ramiz Rovshan and was performed by Samir Gulamov.

The audience greeted the creative team with continuous applause and presented them with bouquets of flowers.